Best Mobile Moto G22 Full Specification Review: Camera, Battery Performance Here –The budget smartphone segment is growing rapidly and most manufacturers are betting on offering more features at a lower price. One such company is Motorola. For some time now, Motorola has been increasingly involved in the competition to launch smartphones. There are some new handsets in its Moto G series, one of which is the Moto G22. 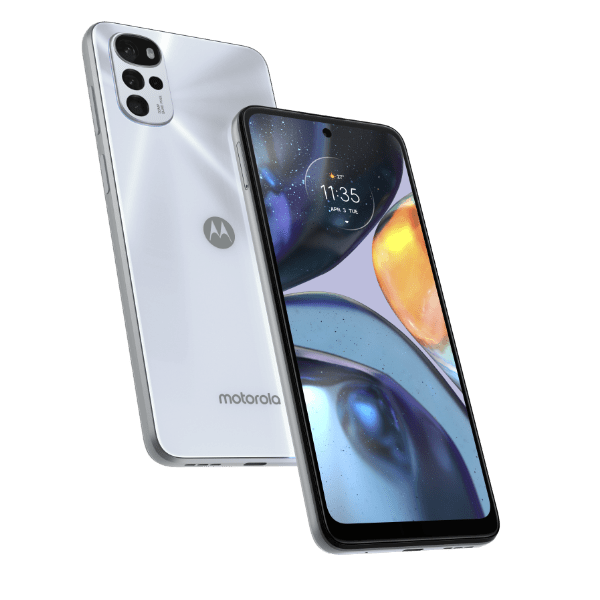 This recently launched smartphone on-paper claims to offer quite a lot. It also includes a 50MP quad camera, a 5000 mAh battery and a 90Hz display. The phone costs Rs 10,999 and competes with smartphones like Realme C31 (Review) and Redmi 10 Prime (Review). For those looking for more features in the budget segment, this phone offers a lot, but is its performance equally good? Let’s find out.

The Moto G22 comes in a single variant in India in which the company has given 4GB of RAM and 64GB of storage. Officially the price of the phone has been kept at Rs 10,999 but on Flipkart and Motorola’s own online store, I have also seen it listed at Rs 9,999.

The style of the smartphone of the budget segment has now changed. Now this segment gets more premium design and build. Talking about the Moto G22, its back panel is plastic which looks pretty attractive. Especially its Cosmic Blue color that I had quite liked. The phone is also available in iceberg blue and mint green colors, which looks pretty good in the photo.

Instead of the typical design with Motorola’s curved back panel, it has a flat design as we see in the iPhone 12. There are fingerprints on the phone, but they are more noticeable only when viewed from a particular angle. The feel of the phone in the hand is good and the edges are not sharp, so the phone remains comfortable in the hand even when used without a protective case.

The quad camera setup at the rear has a slightly different finish from the rest of the back panel. It has metallic texture but it looks good with the entire body design, at least in its Black variant. The camera module is slightly protruding from the panel due to which the phone is unable to remain stable when placed in a flat place.

The phone has a long display with a hole-punch cutout for the front camera. The bezels are quite thin in the sides but in the top porsion it eats up part of the screen. The bottom chin is also slightly thicker. The phone is light in size and weighs 185 grams. The weights are well balanced and there is no trouble to use even with one hand.

Its power button and volume rocker are on the right side. The top has a 3.5 mm headphone jack. In the bottom part, you get a USB Type C port, speaker grille and primary microphone. The SIM tray is on the left side of the phone, offering space for two Nano SIMs and a microSD card up to 1TB. In the box you find a protective case and a TurboPower 20W charger.

Specifications and software of Moto G22

The Moto G22 gets the MediaTek Helio G37 SoC which is based on the 12nm fabrication process. It is an octacore processor clocked at 2.3 GHz. Together with the IMG PowerVR GE8320 GPU with a maximum frequency of 680mhz. It supports a 90Hz refresh rate which its 6.5-inch HD Plus IPS LCD display uses well.  .

For connectivity, it has support for dual band Wi-Fi ac, 4G LTE, GPS/a-GPS, and Bluetooth 5. The device does not have an official IP rating, but the company says that it has an anti-water coating, so that the phone can not be easily damaged in light splashes. The device has a 5,000 mAh battery with 20W charging feature.

Motorola is known for its near stock Android software and this also applies to the Moto G22. The device comes with Android 12 out of the box which is not much to see in this price segment. The June 2022 security patch was given in my review unit. The company promises security updates for the phone for up to three years.

The Moto G22 gets bloatware in the form of apps like Josh and Dailyhunt, but you can also prevent them from installing during setup. Inspired by Xiaomi and Realme, Motorola has also brought the Glance wallpaper feature but it can also be disabled from the Settings app.

I have always loved a clean user interface (UI) experience and it is possible with the Moto G22. Throughout the UI, you can navigate easily and find anything that is easy enough. Home screen and lock screen can also be customized with Theme Engine. This makes the widgets and app icons pick up the theme color of the wallpaper which looks pretty good and mixes in the UI.

Motorola’s smartphones are known for their classic gestures that have a karate chop action-with its help, the flash light can be activated. Screenshots can be taken with three finger gestures and the camera can be launched with twist gestures. You don’t get a dedicated gallery app in the Moto G22, so you either have to use the Google Photos app or download another third party app.

Performance and battery life of the Moto G22

The Mediatek Helio G37 SoC is an energy efficient chip but despite the light and thin UI of the Moto G22, it was not able to handle simple tasks well. Apps like Instagram, Twitter and Facebook were also getting stuck lightly. Even after setting the display to 90Hz, it did not get that smooth scrolling experience, as I like.

Speaking of benchmark scores, the phone scored only 114,222 points on AnTuTu. In Geekbench’s single and multi core, it scored 170 and 955 points respectively. The phone only scored 5.6 fps in GFXBench’s car chasing test and only scored 3.0 fps in the PCMark Work 5,683 test. These scores were much lower than the average and I expected more. The Realme C31 phone at the same price brings better scores with the Unisoc T612 SoC.

However, the phone is not made for gaming yet, I tested some heavy and light games in it to find out the potential of the phone. In this, Legends Mobile and BGMI could not be played even on lower settings, which was not surprising. Call of Duty: Mobile ran fine on low settings. Asphalt 9: Legends had it locked on performance mode and the game went fine. The Moto G22 was easily able to handle lite games like Temple Run and Subway Surfers.

The phone does not get high resolution but it gets as much as the rest of the devices in this price range. It has a 720×1600 pixel display. Each app icon seemed to have low resolution around the corners and text. The colors on the display look balanced and watching movies and TV shows on it was a good experience.

Viewing content from different side angles did not show any shift in colors. The display has Widevine L1 certification, but Netflix does not support it. Even on Amazon Prime Video, I was able to watch movies in 1080p resolution. For colors, one gets the option to choose from saturated and natural. The speaker quality of the phone is fine.

With a little gaming and streaming some movies, its battery lasts a little more than a day. The phone lasted 20 hours and 10 minutes in our HD video loop test which is going to impress a lot. With the 20W TurboPower charger that comes with it, it was charging 36 percent in half an hour and 59 percent in an hour. It took 2 hours for the phone to fully charge.
Moto G22 camera

The front gets a 16 megapixel camera with f/2.45 aperture. The camera interface is straightforward and neat. All the necessary shooting modes and settings you get in reach. It also offers Dual Capture mode for photos and videos, which is also useful. A variety of filters and beauty modes are also provided. However, the camera app crashed several times while using it, especially when switching between modes in the UI.

The primary camera captures photos of 9.4 megapixels by default. In the settings you also find the option to select in 6 megapixels or high resolution. The photos taken from the phone looked good from above but lacked sufficient details when zooming. One thing that I liked about its primary camera is that it was keeping the colors constantly neutral, which gives a lot of scope to use in editing.

The main camera was cropping the photo a little more to my liking. With the ultra wide angle camera, the details in the photo were significantly reduced, and cool tones began to appear in the image. However, distortion was very low on the edges, which is a good thing.

Macro photos remained average because it lacked details due to having a low resolution lens. The portrait shots looked good and the phone was also able to lock the focus quickly. The camera app also gives you the option to choose the blur level before shooting.

The main camera of the phone in low light took average photos. Most of the low light photos got a lot of noise. The ultra wide angle camera got the details fine but the photo was just worth using. In Night Vision mode the photo got brighter but the noise was increased in some parts.